I installed my first A6 sector and related C6x, all with version 3.1.1
The distance is 2.5km.
I set the sector to 6ghz channels and 80Mhz bandwidth.
I can’t get more than 100-110 Mbps TCP through in oscillating downloads (from the antenna test it gets around 400Mbps)
In upload same thing, we are on 70Mbps TCP (from antenna test it gets to 120Mbps)

We have mounted the c6x with the n5-x16 antenna.

The received signal on the station side is -69 and -73 on the access point side.
It is really low, even aiming at the best, despite full visibility
We also tried to point the sector well of both azimuth and tilt

Why is the signal so low?
Why is the tcp throughput so low?
The n5-x16 antenna was not screwing on well. We had to file the thread
When I launch the antenna test from the station it stops passing traffic until I kick from the ap.
I can’t set the tx-power to 24 on the station it stays maxed out at 18, while from ap it goes up to 24

what country are you in Mexico?

Italy
Do you say it involves diversity ?

Let us please see the Channel and Power page!

See page from AP and from client for the Spectrum Analyzer

It will tell us a LOT - if you have other AP’s in you 80Mhz range that will lower your throughput.

No interference.
The only thing I see is that you have a problem setting the power on the c6x.
In fact despite being at 24dB in the dashboard it does not exceed 18dB 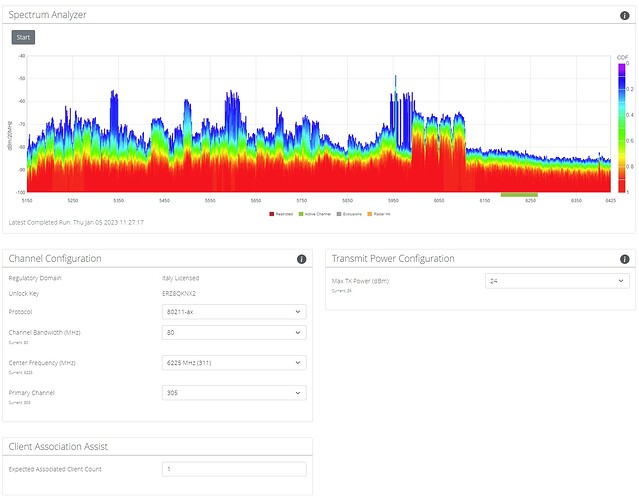 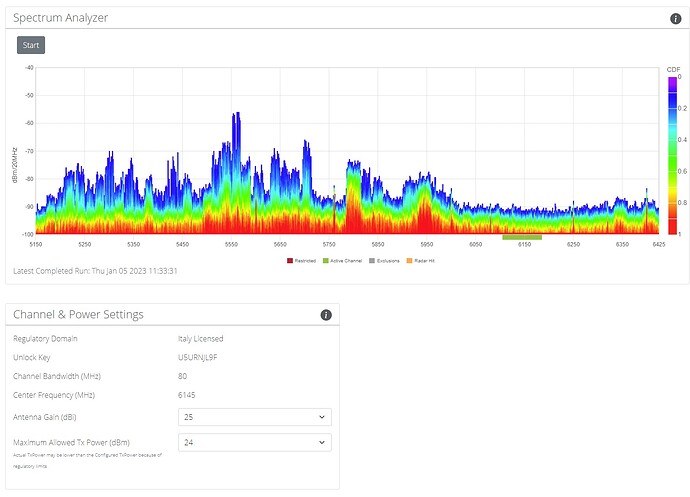 Hey Mirco, please check if you have some ports on the tower switch @100 Mb/s, the speed ports mismatch can cause a microbursting issue on the switch lowering the perfomance.

Hello Giuseppe, greetings from Venezuela, we have been waiting for the release of 6e, we were waiting for another brand but the other brand did not finish developing the products, to compete with fiber, we already ordered the first ones to do our tests but they have not yet arrived, we are attentive to your results, since the first post I see of this antenna, it would be a real shame if the first tests do not comply with what is offered

so what are the results?

any updates or the problem remains?

Mimosa shows off it battles against noisy spectrum, I am very dissapointed from what you are posting here

We are waiting to see what the real perfomce is before buying one, it was already bad with the C6X purchase that they published that they would work in PTP mode both in the distributors and in the manual we buy several and we have that money lost until give us an answer if they will return it to us