I have mostly used C5’s in the past but am using a lot of C5x’s now. What happened to the Bandwidth Test that tested between 2 radios? It has been very helpful in remote diagnostics. 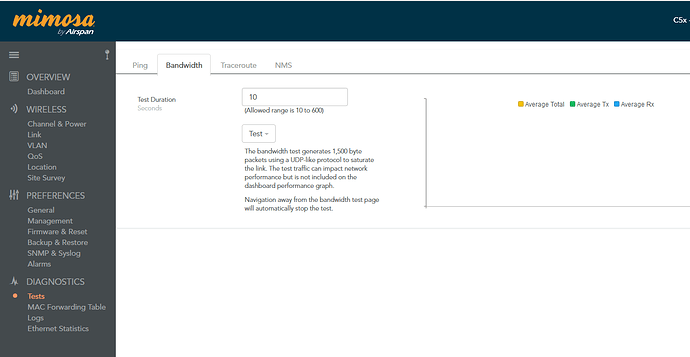 Yes, that is the test but it does not show up in PTMP mode.

For the C5x to work as PtMP, it’s supposed to be connected to something else, such as an A5, not another C5x. If so, does the device at the other end have the ability to run the test?

I can answer.
No, there is no bandwidth test on the A5. The other must be the operating time of the device. Only link uptime on Dashboard

If the problem is that the A5 doesn’t have a Bandwidth test in it, could that be some thing developers could look at adding??? I can with all the other guy’s equipment.

There will most likely never be a bandwidth test in the legacy PTMP products. The A6+C6x does have a bandwidth test and the new A6 line is where all of the feature and product development is focused at currently.

That’s too bad. I have several of these installations and it would be helpful!!!